Announced in Peterborough Ontario during Ontario Contact 2016, four Awards of Excellence to individuals and an organization for their contributions to the performing arts touring sector in Ontario.

The Ontario Contact Awards are presented annually at the Ontario Contact conference. Nominations are accepted throughout the year and a nominating panel meets to discuss the nominees and determine which best represents the values of Ontario Contact and the touring sector. Each year an artist from within the hosting community is chosen to create the awards. This year, the awards are the works of 4 Peterborough artists.

Agent of the Year was presented to Nicole Rochefort. With experience gained from working with Live Tour Artists, Nicole created AIM: Artists In Motion talent agency in 2011. Dedicated to developing emerging and established artists, Nicole’s passion for live performance has led her to establish working relationships with presenters and artists in developing and growing audiences. Nicole’s personable attitude has garnered her the respect and admiration from colleagues throughout our network.

Ms. Rochefort was presented a work by David Brown, a Sheridan College graduate. Brown’s art does not follow any one discipline; he is always exploring multiple avenues of creativity. David represents the forward-thinking twenty-first century artist who embraces traditional art forms as well as the evolving tastes of today’s art community. 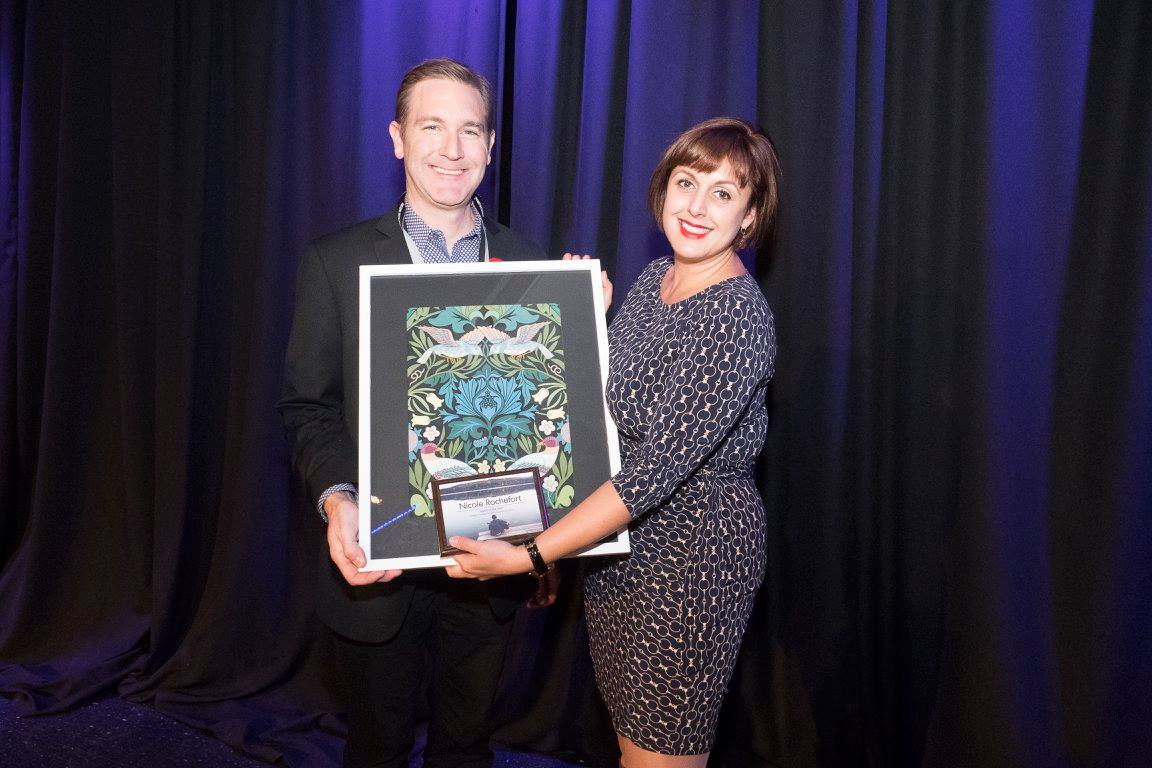 Ontario Contact is pleased to be presenting Artist of the Year to one of Canada’s leading contemporary dance artists – Andrea Nann. Artistic Director of DreamWalker Dance Company, Andrea Nann is a deeply rooted in developing community through her artistic practice. She doesn’t just tour her work into communities, but instead develops projects that create meaningful and long-term relationships with the communities she visits. Andrea’s project – The Whole Shebang - embodies these values beautifully. This project brought Andrea and the DreamWalker Dance team into communities over a few years to build skills and creative vocabularies with professional and non-professional artists. The work continues to resonate in the communities that have been touched by her work.

Ms Nann was presented with a work by Dianne Latchford, an emerging artist, working primarily in oils. After more than three decades as a professional actor, singer and musician, she has now discovered a passion for the visual arts. Her work is held in private collections in Canada, the USA and the UK. She began painting in 2012.

Presenter of the Year went to Jayson Duggan, the Performing Arts Manager with the City of Kingston’s Cultural Services Department. Upon his return to Kingston in 2011, he spent 18 months as the Artistic Administrator for the Grand Theatre Presents program before taking on the role of Performing Arts Manager. Prior to 2011, he was employed at Hamilton Place Theatre and McMaster University where he programmed a wide variety of performing arts. His undergrad degree came from Queen’s University where he studied musicology and he began his programming career by booking artists into Alfie’s Pub. As the Performing Arts Manager for Cultural Services, his primary role is the curation of the Grand Theatre Presents (GTP) program. Jayson is well known within the performing arts sector for being an innovative and creative programmer, and he has a strong commitment to championing a wide and varied season of performing arts experiences ‎for the audiences he serves.

Jason was presented a work by Michael Morritt, an independent filmmaker, writer and photographer based in Peterborough, Ontario. Morritt brings a filmmakers attention to movement into his still-camera work, unearthing and revealing the hidden drama in his photographic subjects. Always pushing his camera to the edge of its capabilities, Morritt uses long exposure techniques, rapid-shutter still-life, shift-lens photography and light painting approaches to obtain a vision seldom seen of the world around us. 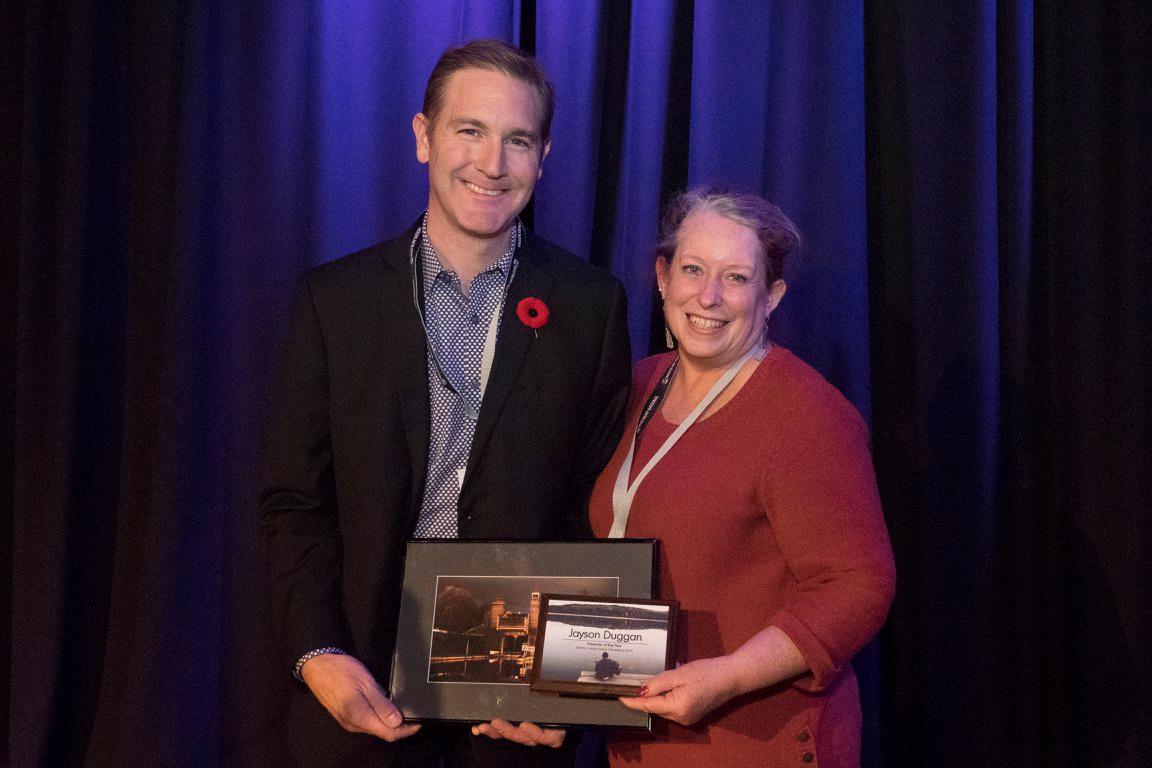 The Award of Excellence is presented to someone working in the touring sector that has had a significant impact on the sector as a whole. Ontario Contact wishes to recognize those who raise the bar for the rest of us and tonight’s winner is a huge supporter of the classical music sector. Stan Passfield has single handedly kept the classical music network going through seeing a need for collaboration and doing something positive about it. He has persevered through Internet and technology challenges to help communications improve between presenting groups. He has spent time in the Contact Room talking to presenters about the need to keep the classical music network healthy and continues to develop his own skills as a presenter who wishes the best for his community. Orillia and Ontario are blessed to have known him and to benefit from his passion.

To remind Stan of his contribution to the performing art sector, Stan was presented with a work by artist Joe Stable. Joe Stable has been making art in a variety of media for over 40 years while holding numerous day jobs, including positions at Niagara Artists Company, SAW Gallery, and Peterborough’s ARTSPACE.  Since his retirement in 2014, he has become an explorer of new media, producing several series of both digital and physical artworks, With his new copper drawings he continues to explore themes of line, movement and figure, using sheets of copper densely packed with humorous details that slowly reveal themselves to the viewer, while maintaining the harmonious flow and balance characteristic of his well-honed style. 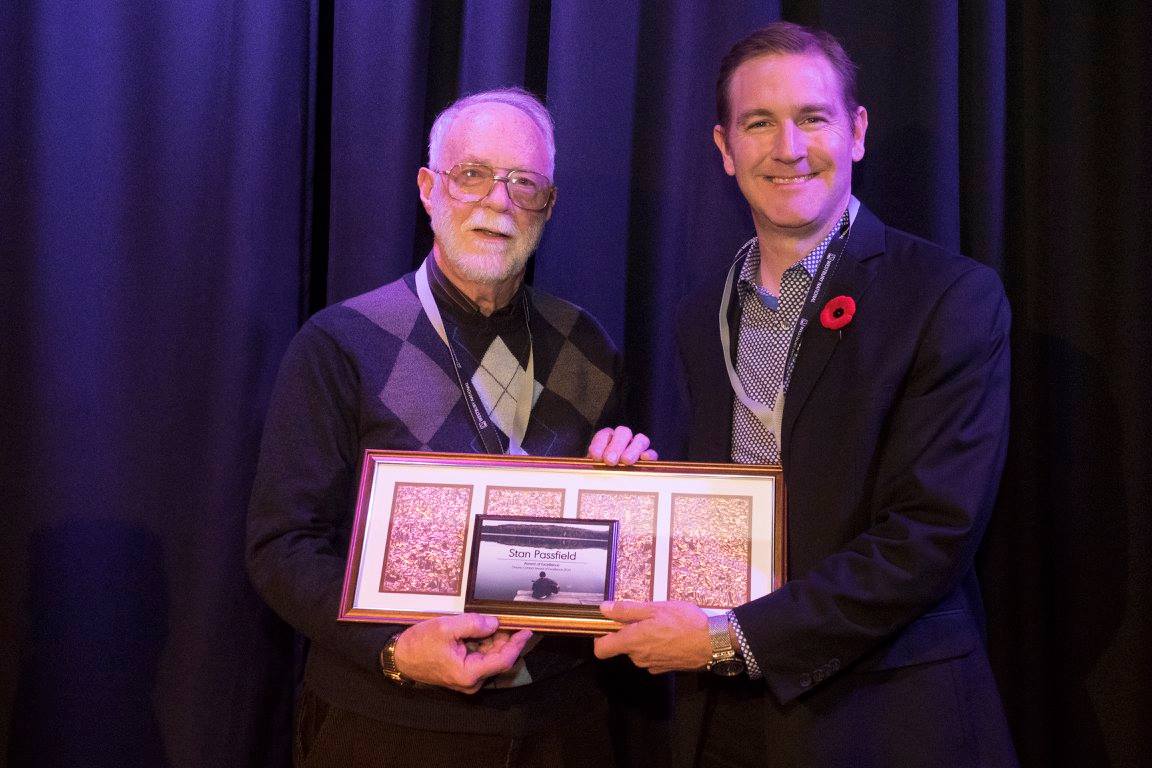 Ontario Contact is a conference designed for bringing together members of the touring sector for networking, showcases and professional development. Produced by Ontario Presents, it is a major tool for showcasing the arts and fostering creative communities. Over 500 artists, presenters, agents and managers come together during the conference. Ontario Presents is a member-based, not-for-profit arts service organization that serves performing arts sector in Ontario. The Ontario Presents network comprises of performing arts centres, municipal venue presenters, academic venue presenters, festivals, artistic companies, performing artists, artist managers, arts consultants and individuals who work collaboratively to improve arts presentation practice in the Province of Ontario.