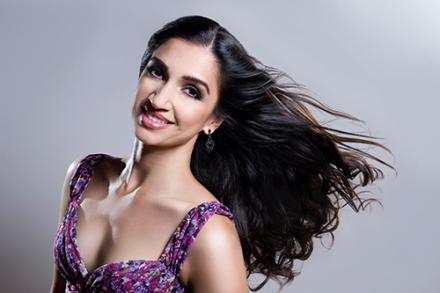 Bageshree Vaze has studied with some of India’s foremost dance and music masters. Bageshree initially trained in the South Indian style of Bharatha Natyam with the late Guru T. K. Mahalingam Pillai in Mumbai, and studied vocal music with her father, Damodar Vaze. She later trained in Kathak dance with Jai Kishan Maharaj, son of the living legend of Kathak, Pt. Birju Maharaj, in New Delhi, and studied vocal music with the renowned Veena Sahasrabuddhe. As a vocalist, Bageshree has four CDs to her credit, including Tarana, an album of music for Indian dance, which was released in India by Times Music under the name Khanak. Bageshree has choreographed numerous Kathak dance works, including 2011’s Avatar (9) and 2012’s Damaru/Mudra, and has performed in major festivals in North America such as the CanAsian Dance festival and Pt. Birju Maharaj’s Kathak festival in India. In 2004, MTV India named her an ‘ubbharta sitara’ (rising star), and in 2010 she was awarded the K.M. Hunter Award in Dance (conferred by the Ontario Arts Council). As a Kathak artist, much of her work is done in collaboration with her husband Vineet Vyas, an award-winning disciple of the legendary tabla master, the late Pt. Kishan Maharaj. Bageshree holds a Bachelor’s degree in Journalism from Carleton University, and a Master’s degree in Dance from York University. In 2012, Bageshree was commissioned by Dusk Dances in Toronto to create and perform ‘Twilight’ at Withrow Park, and the piece was remounted at Fort York in Sept. 2013. In 2012, Bageshree also launched her ‘Spectrum’ series of multi-disciplinary programming in partnership with the Harbourfront Centre in Toronto. Bageshree is currently being commissioned by the CanAsian Dance Festival to create a new contemporary Kathak dance piece under the mentorship of Christopher House, Artistic Director of Toronto Dance Theatre, and the work will be premiered in Toronto April 23-26, 2014. Her new CD ‘Ragas and Rhythms,’ is set for release in India through Times Music in late 2014.