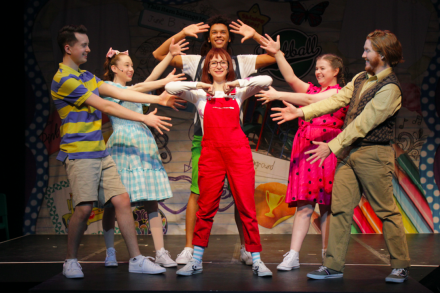 When life gives you lemons, make lemonade! And Junie B. Jones does exactly that, winning your audience’s heart, just as the best-selling book series by Barbara Park, captivated a generation. It’s Junie B’s first day of first grade, and a lot of things have changed. Her BFF Lucille no longer wants to be her friend and her teacher, Mr. Scary, thinks she needs glasses. Throw in a new kid, a kooky cafeteria lady, a kickball tournament, and a “Top Secret Personal Beeswax Journal,” and this fun-filled musical is sure to electrify your venue’s family and education series.

Electric Moon Theatre Company strives to light up your stage with arts education and theatre for young audiences! Founded by Carrie Libling in 2017, Electric Moon has since produced sold out runs of Fancy Nancy Splendiferous Christmas, Big Nate the Musical and Junie B. Jones the Musical at the Richmond Hill Centre for the Performing Arts. In the 2018-2019 season, Electric Moon toured productions of Big Nate the Musical and Geronimo Stilton Mouse in Space – both which visited numerous theatres and schools across Ontario – Geronimo Stilton also had a successful Northern Ontario tour in January 2019. Electric Moon Theatre Company works with several school boards in Toronto and the GTA with theatre arts programming including guest artist in the classroom workshops and lunch-time and afterschool theatre classes. In 2019, they became an approved program partner with the Toronto District School Board for their unique StageStruck Musical Theatre workshops and the touring production of Junie B. Jones. Electric Moon is dedicated to bringing out the best in every child - the only requisites are an open mind and the willingness to see or try something new. Through live performances and arts education programs, Electric Moon hopes to instil a love of theatre and impart the benefits of arts education onto a whole new generation.