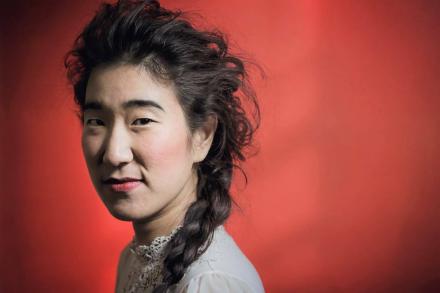 Janice Jo Lee, aka Sing Hey, is a Korean-Canadian folk-soul singer-songwriter, and spoken word poet from Kitchener, on Haldimand Tract treaty territory. Lee is an award-winning performer known for being disarmingly hilarious and off-the-cuff. On stage she creates vocal looping landscapes alongside her guitar, trumpet and Korean jangu drum. Her trio is rounded out with Melinda Suarez on percussion and lead guitar, and Justin James on piano. Lee is a hard femme queer radical and is interested in using art to build flourishing communities based in justice and joy. Her latest compositions are Ancestor Songs, wailing and heart-wrenching melodies full of power and ferocity.

The Toronto debut of her one-woman musical satire Will You Be My Friend premiered at Theatre Passe Muraille in October 2018 to critical praise from The Toronto Star, Mooney on Theatre and an NNNN rating from Now Magazine. In 2018 Lee mentored with foundational dub poet Lillian Allen to initiate the first Groundings Symposium to Raise Up BIPOC Poets. In recent years she has toured Canada performing at ArtsWells (Wells, BC), Vancouver Poetry Slam, Hillside (Guelph), In the Soil (St Catharines), Hot Damn It’s A Queer Slam (Toronto), Kultrun (Kitchener), Home County (London), and Pervers/cité (Montréal).

In Waterloo Region, Lee was voted Best Performance Artist from 2016 to 2018. Lee was the City of Kitchener’s Artist in Residence in 2015. She is the founding artistic director of the Kitchener-Waterloo Poetry Slam and created its first Spoken Word Residency program for emerging professionals. Stay tuned for upcoming albums Ancestor Song, and Lonely is the Lullaby.