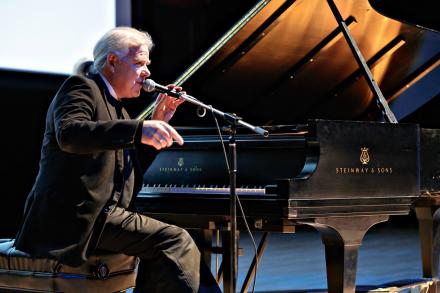 Probably best known as music director for Stuart Mclean’s Vinyl Cafe from 1997-2016, Toronto’s John Sheard has released 8 solo piano recordings and continues to work with artists of all styles and mentor many young musicians. Since 1975, he has appeared on hundreds of recordings with artists such as Rita Macneil, Olivia Newton-John, Ian and Sylvia Tyson, Dan Hill, Rita Coolidge, Mary-Margaret O’Hara, Celine Dion, Matt Andersen, Danny Michel, and many, many more.  He has performed live with too many artists to count, including Rough Trade, Jackie Richardson, John McDermott, Owen Pallett, Suzie Vinnick, Dala, Jill Barber  and Art Garfunkel. As a producer and arranger, he has worked with The Guess Who, Buster Poindexter, Russell de Carle, Dan Hill, Shirley Eikhard, The Good Brothers. John has also produced and written music for television shows such as A+E.’s Biography, Sesame Street, So You Think You Can Dance, Dancing with the Stars, and David Letterman’s Hollywood Film Festival. John has produced hundreds of songs for U.S. educational CD’s, including “Hulk” and “Spiderman” and his music has been featured in several documentaries.