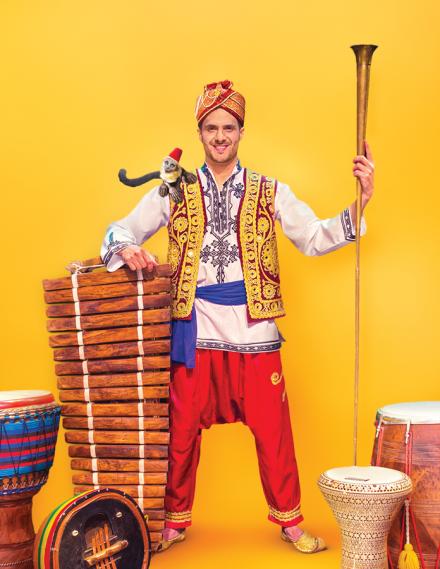 Kattam who is part Quebeçois and part Moroccan–first trained in classical music, studying piano, singing and percussion (Le Plateau School (1990-1995) Joseph-François-Perreault School (1995-2000)). His keen interest in world music and travel has served as the basis for manifold musical experiences abroad. He studied conga, timbales and drum in Havana in 2005, djembe and doum doum in Guinea in 2007 with such international masters as Mamady Keïta and Famoudou Konaté, and derbouka in Morocco with Mustapha Antari. He has also studied dhol through The Dhol Foundation since 2012, and Indian tabla with Hindole Majumdar since 2015. He was able to perfect his skills in pop percussions with Paul Picard, Céline Dion’s percussionist.

On the music scene, Kattam is currently part of Ayrad, winner of a Felix Award and several other distinctions, and has been an active member of several other bands, including Wesli Band and Bambara Trans, named Révélations Radio-Canada; La Mandragore, nominated at ADISQ and winner of an Opus Award; La Famille Zon; and the multi award-winning Niyaz. His experiences have included collaborations with such renowed artists as Marie-Mai, Lynda Thalie, Mes Aïeux, Mélissa Lavergne, Manu Militari, The Lost Fingers, Luc Boivin and the Belle et Bum team, Kissima Diabaté and Saïda Fikri, and more. Kattam also earned his stripes as a teacher and team-building instructor.

Kattam’s artistic path has also been enriched by other experiences. In 2009, he joined Cirque du Soleil for a special event in Washington, where he performed as a musician for an event organized by One Drop Foundation (Guy Laliberté). In 2010 he performed at the Vancouver Winter Olympic Games, and in 2012 he was dancer among the cast that presented a Bollywood dance performance at the Gala des Jutras. In 2013 and 2015, he recorded the percussion under the direction of Martin Léon for the movies A Good Lie and Guibord s’en va-t-en guerre by Philippe Falardeau. He has also been featured in several television performances, including the Série Montréal Québec reality show, for which he created the opening dance-percussion choreography. He played also the lead role in the play Ali au pays d’Alice, presented at Place des Arts as part of the 2012 Festival du Monde Arabe.

Drawing on his extensive experience with youth and family audiences–with close to 200 shows per year–Kattam created his first solo performance, titled Kattam and his Tam-Tams. The show has been successfully presented in performance venues across Quebec and Canada. In addition to his solo show, Kattam release in 2016 his debut music album De Tombouctou à Bombay lending renewed momentum to his career due to various prizes and nominations, as listed below. In 2017 he released his English album Timbuktu to Bombay and in 2018 the DVD of his live show. In 2019 he starts touring in the US.