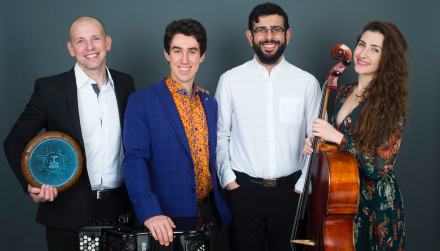 Ladom doesn’t pretend to represent any one tradition, but rather expresses an authentically Canadian cultural fusion of styles. Drawing from Persian, Balkan, South American, and Turkish music, these four musicians effortlessly integrate these musical genres, blending them into a contemporary classical framework. The elasticity of styles is the musical foundation of these four musicians and their vast experiences create a new sound and experience that has vast appeal.

Consisting of founding member Pouya Hamidi on piano, accordionist Michael Bridge, cellist Beth Silver, and Adam Campbell on percussion, the quartet released their second album, The Walls Are Made of Song, in January 2019. Ladom’s recent and upcoming projects included a collaboration on four new compositions from the Iranian-Canadian Composers of Toronto and collaborating with Aga Khan on a children’s project based on Rumi’s Fables. Ladom has toured with Jeunesses Musicales Canada (September 2017 and April 2019), Debut Atlantic (April 2018) and Prairie Debut (January-February 2019). More tours are scheduled, as Ladom continues to spiral upward and outward into the Canadian music scene.

From the stage, the concert transcends borders and the diverse qualities that each musician brings to the ensemble results in an unconventional experience for all. The concert experience from Ladom’s performance is best said by CBC Radio’s Errol Nazareth – “This is the first time I have heard such a fascinating mix and it really works well. The music can be very elegant and contemplative, and it can also be rocking and fiery and there is no denying of the passion of the four musicians investing in their playing.”