Nicolas Ellis and the Agora Orchestra 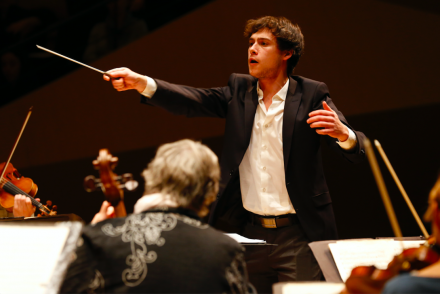 The Agora Orchestra, founded in 2013 with Nicolas Ellis as its conductor, is composed of young, talented and passionnate musicians, between 20 and 30 years old, among the best musicians of their generation. They aim at changing the world a note at the time. Their mission has two folds: to promote classical music while contributing to the society. They often partner with local charitable donations and generously give them part of their ticket sales. The have attracted several highly recognized artists to perform with them including: Andrew Wan, concertmaster at the Montreal Sympony Orchestra, Martin Chalifour, concertmaster at the Los Angeles Philarmonic Orchestra, Charles Richard-Hamelin, pianist, and Kerson Leong, violinist.

Nicolas Ellis is the Artistic Director and Founder of the Orchestre symphonique de l’Agora in Montreal, an orchestra whose mission is to organize benefit concerts for humanitarian organizations. Since the beginning of the 2018-19 season, Nicolas holds the position of Artistic Partner of the Orchestre Métropolitain in Montreal.

His recent engagements have brought him to work with the Filarmonica Arturo Toscanini in Parma, the Camerata Salzburg, the North Czech Philharmonic and the Orchestre de la Francophonie. At the invitation of Yannick Nézet-Séguin, Mr. Ellis conducted a 5 concert tour with the Orchestre Métropolitain in the province of Québec during the summer of 2017, which earned him praises from the critics describing him as “a born conductor, a conductor of instinct” - Le Devoir. In addition, Mr. Ellis’s concerts with the Orchestre symphonique de l’Agora were nationally broadcasted on Radio-Canada (2015, 2016). Mr. Ellis was also the Resident conductor of the Orchestre symphonique de Québec between 2015 and 2018 and worked closely with Music Director Fabien Gabel. He was invited to come back as Guest conductor for the 2018-19 season for two subscription concerts.

In 2017, Mr. Ellis was also the recipient of the Bourse de carrière Fernand-Lindsay, a $50 000 prize presented biennially to the most promising and emerging Canadian musician by the Fondation Père-Lindsay. He is also the recipient of the 2015 Heinz Unger Award delivered by the Ontario Arts Council. This national award, presented biennially to an emerging professional Canadian conductor, recognizes talent and promise, musicianship, and commitment to Canadian repertoire and Canadian musicians. Nicolas Ellis was named classical revelation of the year by Radio-Canada (2018).