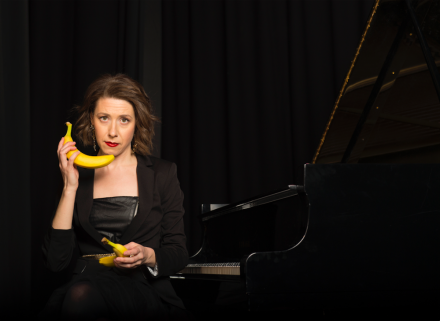 For her role as “classical pianist”, Sarah Hagen was awarded as Ontario Contact’s 2017 Artist of the Year and the BC Touring Council’s 2015 Touring Artist of the Year. With a performance career taking her from Goose Bay, Labrador to Gothenburg, Sweden, and on to Carnegie Hall as a First Prize Winner in the 2013 Bradshaw & Buono International Piano Competition, the Charlottetown Guardian described her 2014 recital at UPEI as the Best Classical Performance of 2014, saying, “...the level of passion that Hagen possesses - when it comes to experiencing, interpreting and expressing art - is something quite extraordinary. It does seem to be this deep level of artistic understanding, and ability to communicate on this level - either through words or through artistic expression - that truly sets her apart as a pianist and musical artist.”

Often referred to as the next Victor Borge, Sarah has transformed her award-winning role as “concert pianist” into a stand-up, or rather, sit-down comedienne. Pairing anecdotes with music, “Perk up, pianist!” is a uniquely charming music and storytelling experience that takes you deep inside the world of a touring classical musician on the lookout for love. Described as “one of the best hours I’ve ever spent at the Fringe” [The Coast (Halifax)], “Perk up, pianist!” displays Sarah’s dry wit, deadpan delivery, and of course her virtuosic playing. Of the show’s debut at the Toronto Fringe Festival, Montreal Rampage wrote, “Hagen reminds us the beauty of how an honest solo performance can make you so easily fall in love with its performer.”